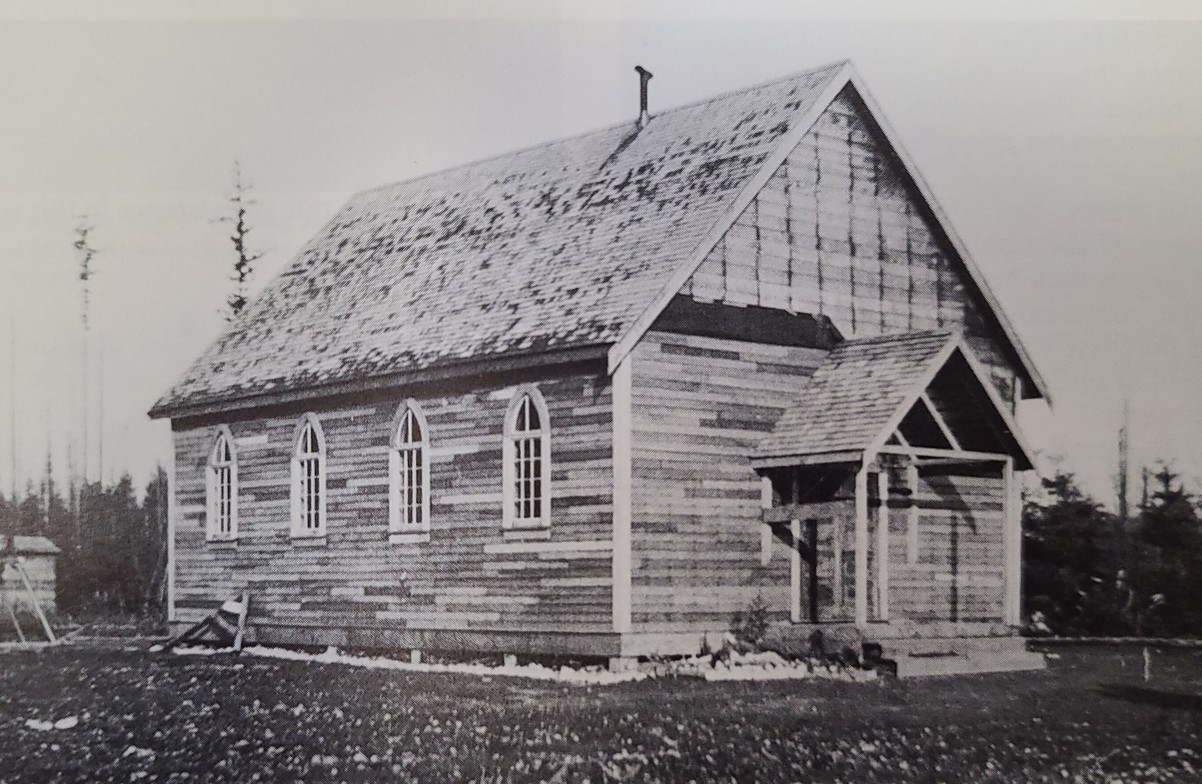 It all began in 1934, when eight Mennonite families came to the Fraser Valley in search of a new place to settle.  They had recently left the Prairies because of the Depression and were hoping to purchase some land and settle here.  They heard of the availability of a quarter section of inheritance property on 248th and 56th Ave. in the Coghlan area-  this being the name of the nearest train station and Post Office, and after some deliberation they decided to buy it.  But it was all bush land!  Nevertheless, by working together they managed to build small houses for their families and then they began to clear the land to grow crops. These eight pioneers were:

A first priority for the new group was to organize church services.  Sunday services in the German language began on the very first Sunday morning that the new settlers arrived.  They were held in the homes with Rev. H.H.Dueck and Rev. Aron Jantzen as leaders.  These two men also served in the Abbotsford area where more"'Prairie Immigrants" were settling.  They took turns riding a bicycle on Sunday morning in every kind of weather on dirt roads, walking when riding was not possible to comfort and encourage the new settlers in their faith.

In 1935 Rev. Aron Jantzen was ordained as the first minister and together with J.J.Wiebe they also began to teach Sunday School classes in the German language.

In 1936 Mr. Jacob Krause donated one acre of his land for the building site of a church and the construction of Coghlan Mennonite Church began. This new 26'x40' church building was dedicated in the Spring of 1937 even though it was not completed inside. Women and little children sat on the left side while the men sat on the right side.  Older children sat in the front.  Nearby Mennonite Brethren, Lutherans and Seventh Day Adventists also came to the services in the new church.

In 1939 John Siemens was ordained as the first deacon.  Otto and Meta Guggenheimer were the first couple to be married and the next year, 1940, the first baptism was held with nine new candidates.  The women to be baptized wore black. Also, in 1940, a choir was formed, led by Aron Jantzen.  They sang unaccompanied.  "Jugend Verein" evenings were organized to be held once a month.

By 1942, Ladies Aid meetings were begun.  An early project was to bleach the cotton flour sacks and sew and embroider them into pillow cases, tea towels, aprons, pot holders, and even curtains.  These became popular items to sell at their annual Missions auction sales.

There was another very interesting developement for this Church of Believers.  Since 1937, the annual Conference of Mennonites in B.C. discussed the need for a provincial Bible School.  Elder N.W.Bahnmann, itinerant pastor for the B.C. Conference paid a visit to Coghan in 1939 and upon seeing the large number of young people, he felt the need to do something.  When a survey was conducted, 22 of them indicated a desire to attend Bible School classes.  Katie Peters, one of those 22 students in 1939, and is still a member of this Church [as of 2011].

The Bible School carried on in the unfinished Coghlan Church till after the 1943 term , after which the B.C.Conference bought land in Abbotsford and developed proper teaching facilities. (abridged from pp43-45 of 'Bethel Mennonite Church' 1936-1980)

As the congregation grew and new settlers came to join the group, it became necessary to expand the church building.  It was decided in 1946 to put a basement under the church to accomodate more Sunday School rooms, a kitchen and a furnace room  A balcony was also added upstairs and it soon became the place of choice for the young people on Sunday mornings.

In 1946 also, the women were given the right to vote at annual meetings.  In this way the Coghlan Mennonite Church became a fully organized and functioning body.

In 1947, Rev. Johannes Regier was installed as leading minister and was given a gift of $300.00 per annum in appreciation for his leadership.  These were the war years and money was scarce. One family scrimping and saving could live on $8.00/month for food.

By 1948, the Coghlan Church was again too small due largely to an influx of European immigrants after WWll.  So it was decided to add another 20'x42' section complete with basement at the back of the church forming a "T" shape.  This was the second expansion.

In 1950, a second ladies group, The Willing Helpers, was formed. This group of ladies carried on their work within the church until May 2010.

In 1951, the Coghlan Church had to change its name because the district changed its postal address to "Aldergrove, BC"  So the congregation chose "Bethel Mennonite Church of Aldergrove" as its new name. Mr. N.N.Friesen and Leonhard Ewert were called to help in the ministry and Heinz Bork became the first Sunday School Superintendent.

In 1955, Mr. N.N.Friesen was ordained as Elder and also in that year, the Boys and Girls clubs were started.  Now there was an active group for everyone in the congregation. The first duplicating Machine was purchased and Frank Bergman duplicated weekly bulletins for many years.

The first library was organized in 1957 when the Church received German books from American Churches who had changed to the English language.  The lanuage change from German to English also came to Bethel in the 50's, but a German service continued to be held until 2006.

But again, the church was becoming too full.  This time, however, the decision was made to build a new building right beside the existing church and to sell the old building. The old building was sold for $1,500.00 and moved away and the new church was dedicated in the fall of 1957.  Church membership was 247. (2007 saw the same number)

In 1960, John H. Neufeld was ordained as pastor at Bethel.  He helped the congregation to form a new constitution in 1964.  The women were given full voting rights and for the first baptism in the new church, the women wore white instead of black.  What a time of exuberance and growth that was!  The Sunday School reached its highest attendance of 337 with attendance at Camp Squeah at 183.  Wayfarers girls club started. These were also the years that the MCC Voluntary Service projects flourished.  Bethel Church sent out numerous volunteers for long and short term committments.

In 1966-75, Rev. Rudy Goerzen became the pastor at Bethel with Rev. N.N.Friesen assisting and Peter J. Dyck became first congregational chairman.  During this time, 1970,  under Marvin Kehler, youth were inspired for Christ  and community outreach and a coffee house was started.  Congregational members numbered 274 with 309 in Sunday School.

Lack of enough space for the Sunday School again necessitated more building in 1968.  This time a two-level educational wing was built and connected to the east side of the church. Another highlight for the church was the purchase of an organ.  Emma Janzen learned to play it and has carried out this service to the congregation to the present time [2011].

In 1976-85, Rev. Peter Retzlaff served as the next pastor.  The constitution was revised during his term.   He was assisted by George Hoeppner who also worked with the youth.  The young ladies formed the "Dorcas Circle", which was the third active ladies group at Bethel.  Bethel had the first woman as a deligate at the B.C. Mennonite Conference, Leni Epp. In the late 70s, a regular secretary was employed and the first custodian was Eva Ens. This was also the time when Bethel opened its arms to welcome and sponsor refugees. Seven families came in the next 15 years from Cambodia, El Salvador, and Yugoslavia. The Huangs, the Kornphoutakouns, the Ayalas, the Traparas, the Jarebs, and the Rusjans.

In 1985-90, Rev. John and Katie Friesen took the leadership in Bethel and in 1988, Brad Jersack started as Youth Pastor.

In 1988, another new sanctuary was designed in the current circular style and built onto the west side of the existing  church building.  The old building, which was now converted into a gymnasium/banquet hall, would start to be used for all social church functions.  A new kitchen with dishwasher, ovens and freezer was installed as well.  The gymnasium could seat 240 persons at tables and the sanctuary including the balcony would seat 600 persons.

In 1990, Rev. Peter and Alma Bartel were invited to the ministry at Bethel Mennonite while Brad Jersack continued as Youth pastor.  It was a time of many changes and outreach. The worship format  changed to include drums and guitars for the singing of contemporary spiritual songs while the piano and organ were used for the choir and hymn singing, weddings, funerals and special services.  There was also an instrumental group. The Boys and especially Girls Club flourished under the leadership of the Klassen sisters.

The ministry among the youth was a challenge.  There was an aimlessness among the youth in our community.  An education beyond high school was out of reach for many because of the costs. The years it took to get a degree and the uncertainty of  finding a degree-related job was not inviting either.  Drugs were on the scene.  Earning big money fast was the goal many wanted.  Technology was king!  But Brad Jersack was up to the challenge.  His emphasis was on personal relationships, individual outreach, one-on-one mentoring, group worship and solid Bible teaching. The youth came to "taste and see"!  "Challenge Team"and rollerblading were community outreach efforts, as was the UGM. "City Invasion“.  A "Kofi Hows" was started. A group of youth and adults went on the first missions trip to Tijuana to build a church.  Another outreach area was the "Little lambs" nursery school, which was run in the church basement by Carolyn and Carmen.

In 1996, Pat and Radika Houmphan were commisioned as missionaries to Thailand.

From 2003 to the present [2011], Philip Wheaton came to Bethel to pastor, while Mike Wilson served as the Youth Pastor and brought to the youth exciting opportunities for involvement, such as building a structure in Saskatchewan.  The Alpha Program began and flourished under the leadership of Catherine Kidd.

But this period has also seen some losses.

But there are growing areas too; areas for praise and rejoicing.

Jun 6
Do it with Love

Subscribe to receive email updates with the latest news.